Having arrived at Frankfurt Lufthansa Cargo and completed the initial process, we were quickly able to unload the ponies and their kit bags. After having a few minutes to walk and stretch their legs we were assisted to load them onto the specially designed container that they would complete their entire flight on.

The specially designed containers are split into three sections with moving partitions very much like an oversized trailer. They are well bedded and have more height and the ramp is much larger with less incline than on a trailer. The ponys all loaded very well with much less issue than I had anticipated. There are other animals such as dogs in the animal hotel and it is quite a big noisy and potentially frightening experience for them. The staff are extremely professional and made the process easy. 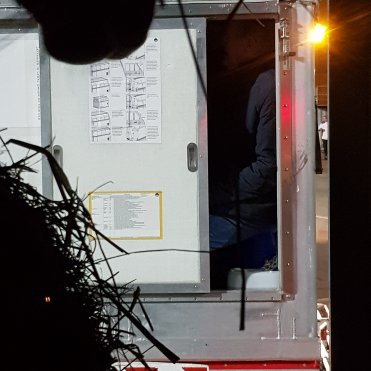 In front of each pony a breast guard is attached (this looks a lot like the guards which you can put across a stable door), if you wish to leave it open without your horse escaping. The area in front of this is not big and in this space we must pack water containers & buckets the kit bags and haynets. 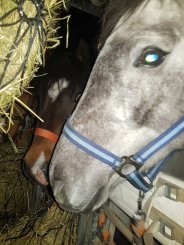 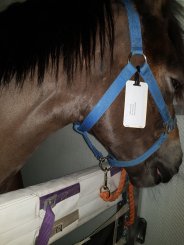 I attached the hay nets so as the ponies would stretch over the guard and down to eat rather than having their heads up this is one of the few things we could do to try to reduce the risk of travel sickness. I attached the spare nets up high and took some additional ones so as we would have some European hay in China for the lorry trip on the other side and hopefully to give them some transition onto the Chinese hay.

It’s always best to make a gradual feed change with horses they have quite delicate systems and especially after a long trip and restricted movement a sudden change in diet could be enough to trigger colic.

Next we were helped to load our luggage into a security vehicle and we completed the usual security baggage and personal checks but at a cargo checkpoint. They then allowed myself and Henry to travel in the containers with the ponies from the loading area to the plan. This is quite noisy and unsettling for the ponies as the pallets are on a forklift type machine.

The next stage is quite an experience as the pallets are lifted up and mechanically maneuvered into the plane. I was again allowed to stay in the crate with th ponies for this stage and we decided that Saskia would need a little oral sedation as she was kicking in the crate and upsetting Roxy and Hugo.

Because the cargo bay oxygen system is not the same as the front of the plane where the pilot and ourselves would stay it is not permitted to stay with the horses during take off. However, they are only separated from us by a curtain so we were able to hear everything and check on them as soon as the fasten your seatbelt sign was cancelled. 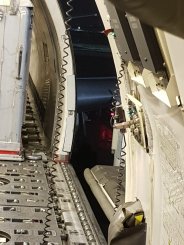 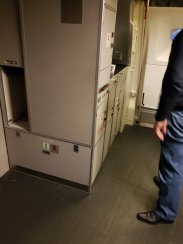 They coped so well and continued to eat and drink throughout the flight we even had a double landing and takeoff in Kazakhstan due to difficult conditions. The landing is much smoother than on a passenger plan and we were able to rest a little as you have fully reclining seats. 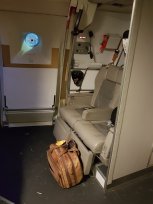 I hope you enjoy the pictures and videos in this blog and I would like to say a big thank you to Lufthansa Cargo airline, Horse Services International and my flying groom partner Henry who made the whole process as smooth as possible for us.

Don’t forget to support and follow us on FB Free Filly Services and Freefilly.blog

Many thanks for reading….

I am a Freelance Rider-Manager and Equine Consultant. Originally from N Ireland. I have a passion for all things horsey, especially whilst traveling the globe and absorbing new cultures. The world of horses is colourful vast and diverse. So much to be learnt and experienced that I decided to share it through a Blog. Having been based as a professional rider with a retraining and livery yard of 25 - 30 horses for eight years in the stunning county of Northumberland it was unclear what could follow such an epic chapter of my life. Having travelled to India to train as a yoga instructor and figure out what came next! I stumbled across www.princesstrails.com and found myself having an amazing experience in the majestic area of Udipar. I was warmly welcomed and spent days riding the historic Mawari Indian War Horses. Since then I have travelled all over the Globe. Working aross disiplines with all sorts of horses and projects. From Show Jumping tours to Arrezo to Flying Ponies to China. I hope to inspire others to be free from the imaginary restraints that we and our societies place us under. Shine like a diamond and others will shine with you! View more posts